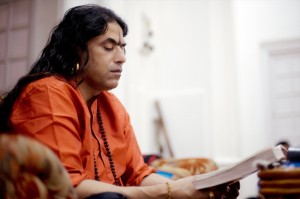 Yoga Sutras of Patanjali (ca. II century BC) consist of aphorisms and didactic sayings that reveal the meaning and goal of yoga. Relying on his own experience of a realized yogi, Shailendra translated this work from Sanskrit to Hindi and made a yogic commentary on it.

Shailendra translated Shiva Sutras from Sanskrit to Hindi and made a yogic commentary on it. Shiva Sutras granted, according to tradition, to a sage Vasugupta (VIII century CA) by Shiva himself, are devoted to such problems as nature of reality and achieving of liberation.

A book of poems written by Shailendra during three days of a Holi festival, 1993. A period from October 1992 to June 1993 was a hard time in Shailendra’s life: he left his home and was wandering about India in search of a new shelter. He overcame a lot of hardships and learned various life lessons. All these were reflected in the book of poems Viator.

Some Flowers And Some Thorns

Shailendra’s aphorisms collected by his disciples.