Shailendra Sharma is a kriya yogi whose line of succession goes back to the great yogi Babaji Maharaj.
Shailendra was born on July 10, 1957 in Bhopal, India in a family of a respected judge. Since childhood Shailendra adored reading and used to read any book he could find at home or borrow from his friends. In 1978 he graduated from college in Gwalior with a Master’s degree in Political Science. Then he passed all the exams necessary to join Indian Army, but at the last moment, to his relatives’ great surprise and indignation, Shailendra decided to refuse military service. The fact is that at that very time several of his relatives suddenly died. These events influenced Shailendra deeply.

“And a question came into my mind: what is death, what is life and what happens when a person dies? This question became so prominent in my mind, that I abandoned my thoughts about any career in the Army and began to search. And during my search I came across yoga system and this lineage. There was some information that by practicing this you can understand what happens after death. And then the question of immortal soul emerged”.

Thus the meeting with death led Shailendra to studying yoga. Soon after he returned from military training and was spending all his time reflecting on the meaning of life, he remembered that one of his friends he met there advised him to read “Autobiography of a Yogi” by Paramahansa Yogananda.

“I was nineteen or twenty at that time. I went to the bookstore and found that book. I still remember I paid sixteen rupees for it. I read it in one breath. The pictures of Lahiri Mahasaya, Babaji and others were so familiar to me as if I knew those people. And when I read about kriya yoga, I thought: this is the thing I must do. And I began to search for a guru”.

For several years Shailendra was wandering around India in search of a guru to teach him the original kriya yoga.

“I faced lots of adventures and misadventures while searching for a guru. So many fake gurus, so many techniques that only in word are the techniques of kriya yoga, so many false sadhus and sanyasis. I was 25 years old. Did I think that those three years of searching for a guru would be so educative? Now I can make a comparison, I can see what is wrong and what is right”.

At last, in 1982, Shailendra met Satyacharan Lahiri, the grandson of the founder of kriya yoga Lahiri Mahasaya, who got the knowledge directly from Babaji. And again the techniques the guru taught him seemed to Shailendra very familiar, as if earlier he had already known them. His own practice was advancing fast and successfully, and in just two years he became a guru and a successor of Satyacharan Lahiri. 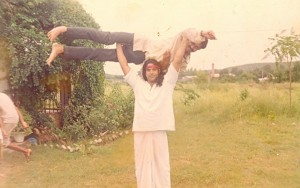 to give answers to different questions. But also came a huge responsibility, because when you initiate somebody, you are supposed to be responsible for whatever he does and what he makes of his life”.

Soon in 1984 Shailendra experienced his first samadhi, the confluence of individual consciousness and the cosmic absolute. Then Babaji appeared and taught him certain breathing techniques, pranayamas.

Shailendra moved to the country. He built a house on a farm with the help of his disciples and began to lead simple life all his time spending on practice.

“Suddenly I became much wiser. Besides I became so strong that I was lifting most of my disciples over head with one hand. And that was the first time I understood that yoga practice also gives you extraordinary physical abilities and strength”.

Once a disciple of Shailendra asked him some question – and unexpectedly he composed the whole commentary on Bhagavat Gita. For three weeks were his disciples taking down from his dictation. “There was a special inexpressible atmosphere. Guruji’s whole body and aura was around him were golden” — recollects Nahar Babu, Shailendra’s disciple. In the next years within three days Guruji created a commentary on Yoga Darshan and a commentary on Shiva Sutra within a day. It was a real inspiration. Three more days – and 54 poems were written. Soon all these books have been published.

Shortly after the rumors spread all over Gwalior that Shailendra cures people, meets with spirits and disappears before people’s very eyes. His photos could be seen not only at his disciples’ houses, but even in the temples alongside with Hanuman pictures.

“Now you do understand why I had to run away from Gwalior! Becoming famous like that is a real disturbance. Everybody could come and knock at my door — that was a simple one room cottage. At last I put some gatemen to control this flow of people. But it was very difficult for me to go out in the city: people gathered around me. I remember very well that from the childhood I knew that I would write some books, live in a palace-like building and create a temple of Shiva. Lots of people thought I was crazy. I had no job, no business – and people used to laugh at me: “He has no money. But he thinks like a king”.

In 1993 a descendant of maharajahs of Bharatpur dynasty who long ago built the smashan and the palace in Govardhan, with the participation of Archaeological Survey of India transferred this property to the possession of Shailendra who was appointed as a keeper and guardian.

“Like a miracle! An unemployed and suddenly – an owner of a palace! That became possible only with the grace of my guru and Govardhan Maharaja. I am sure it was manipulated by Shiva himself and Babaji”.

Shiva, as previously mentioned, always played and important part in Shailendra’s life: he was his family god. In 1998 Shailendra found a natural Shivalingam. He installed it in the smashan, at a place of cremation of maharaja Jashwant Singh of Bharatpur dynasty and began to perform daily ritual of Shiva worshipping. At present Shailendra lives in the smashan, practices yoga, initiates disciples all over the world and converses with them on philosophical issues. “My house is open for all true seekers who come to me with sincere heart” — he says.

His life being outwardly quiet and regular, you can find incredible events that happen in the life of Shailendra and his disciples. A more detailed description you will find in the website articles and in a book that is going to be published soon.