Help of the Guru

It happened near Agra at 1989 approximately. My youngest son and I and some friends came to visit a spiritual act taking place at a thirty-five kilometres distance from a small village of Fatehabad. That village experienced troubles with water, so one man suggested bathing children at the canal. All of us embused on a tractor trailer so there were about twenty – twenty-five people there. I was sitting next to the driver in the cab, my child and the others took their seats in the trailer. 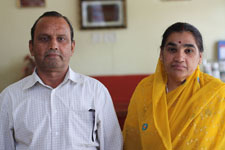 There was a dried up pond at the road. At a turning point of the road we had to ride up a four-meter slope of a forty degree angle. It so happened that after turning and starting to ride up the hill the tractor almost reached the top when the engine broke down of overstrain. The tractor began rolling down.

Besides rolling off the slope it slipped down to the dried up pond of four-five feet deep.

I climbed out of the going down tractor. The rest were staying within the trailer. As I touched the ground with my feet it seemed to me that Guruji was right in front of me, and then – that I turned into Guruji myself, getting much taller and stronger.

I set my hands against the large back wheel of the tractor. There was a man-made road hewed through that hill framed with two walls. That’s why the slope was so sheer.

The trailer kept on slipping down, so I weighed upon the wheel with all my might. The trailer leaned and set against the wall thus ceasing to slip further. If the tractor had rolled further with the trailer, all the people within, all the children including my baby would have perished.

When the engine got cut out and the tractor started getting down, I thought that all of us – so many families with so many children – came to the Satsang spiritual festival but were going to die. And that was the moment I left the tractor and felt as if I were Guruji.

I saw the trailer stop slipping off and then fainted of emotional overexertion. I stayed unconscious for about fifteen minutes.

After that the people said that I had saved the lives of us all and everybody would have died if not for me. They affirmed in admiration that I had got help from a certain power.